I am pleased as hell to announce that Chris Huth has agreed to illustrate Swords Against the Outer Dark: Sword & Sanity Roleplaying. Chris is a very talented artist, and I feel his work captures the tone and feel I am looking for for this project.
This morning I wanted to take a moment to share the first illustration Chris has turned in. I sent him this as a concept for the piece:

The idea I have is to incorporate the "when the stars are right" statement that Lovecraft used for when the Great Old Ones would awake and return to rule the earth again. The idea I had was a scene of a battle between druid-like cultists dressed in dark robes and wielding curvy daggers, and a group of stalwart adventurers. The encounter takes place amongst an ancient set of standing stones, perhaps on a barren hilltop. The scene is at twilight, and an exaggerated star field acts as the backdrop. Maybe within the constellations there is an implied image of Cthulhu or some other Elder Thing looming down from above. I am thinking two large stars gleam where the eyes would be. I prefer an ancient look for the armor and weapons, so more Atlantis or Hyperborea over quasi-medieval.

From this concept Chris sketched a few ideas and sent me this: 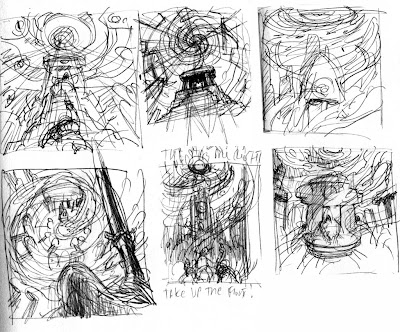 When I saw the sketches I knew I had the right guy. I could see the potential behind these rough images, and I could tell the direction he wanted to take the piece. Chris took these concept sketches one step further and refined them into this: 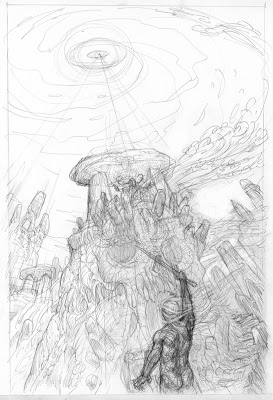 Needless to say, I was hooked when I received this sketch. I couldn't have been happier with what Chris was producing here. He took my idea, and was able to keep it within the frame of the concept, while presenting a scene that is both straight forward and powerful. Another early comment I made to Chris was this:

Overall, I am looking for pieces with atmosphere over gonzo.... I know a lot of people mixing fantasy and cosmic horror tend to take it over the top with tentacles everywhere and "full frontal" Cthulhu kind of thing. I am not saying that sometimes going that route is wrong. I am sure we will have several illustrations with sword on tentacle action. It cannot be avoided with a product like this. But I would like to present a product that is rich in dark texture and has a brooding atmosphere to it.

Chris understood this comment an delivered an illustration that was very faithful to my wishes. A few days later he sent me the final piece, seen here: 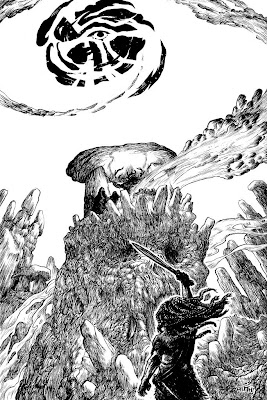 In the end the constellation idea morphed into the swirling nuclear chaos of Azathoth. Three cultist stand at the base of a set of standing stones, cauldron in front of them, as they perform a dark ceremony. A strange smoke emits from the cauldron, boiling up to the heavens; rising and mixing into the the swirling chaos in the sky. All the while, Azathoth looms above, gaining in power as the invocation is performed. At the base of this strange outcropping of rocks stands our stalwart warrior ready to risk everything to stop this terrible act he is witnessing.
I believe this will end up being the cover of the book. It will definitely be used for a t-shirt design I am currently working on. The sale of these shirts, and other swag I will be offering, will help finance the illustrating of the rest of the book. I will have more on all of this before this coming weekend.
All in all, I think Mr. Huth has done a great job with this first illustration. I personally can't wait to see what he is able to come up with as the project moves forward.
Posted by Shane Mangus @ 12/28/2010

That's great news! I've had Chris do some work for Weird Adventures and its been phenomenal. He's got a great style for weirdness.

This looks great, Shane. I'm really looking forward to this.

That's a nice piece of artwork!

Whoa, that is pretty cool.

Looks great! Getting an artist that can get across the right feel for your ideas is so important.

Gorgeous stuff. This Huth guy has got the goods.

Thanks for all the great feedback guys!

"Gorgeous stuff. This Huth guy has got the goods."

I couldn't agree more, Greg. Huth is one talented dude! And I am honored to have him working with me on this project.

Very cool. Best of luck with the project, I'll definitely be by to check it out!