Here is my latest effort, hot off the presses! I present the Advanced Labyrinth Lord Screen, which is a landscape three panel reference screen for use with Labyrinth Lord and the Advanced Edition Companion. It was designed to be printed and easily used along with a customizable game master screen.
Also included in this PDF are a few Labyrinth Lord themed inserts that can be displayed on the front of the screen. I wanted to create graphics that could be used during game demos and conventions that would help promote Labyrinth Lord, the Labyrinth Lord Society and Goblinoid Games. If anything, Dan Proctor should appoint me the LLS Minister of Propaganda and Public Relations for this one!
As usual, feedback is appreciated and also alert me to any errata that may be needed. Finally, a big thanks goes to David Baymiller, who acted as my proofreader on this project.
Inserts: 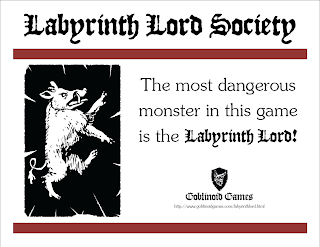 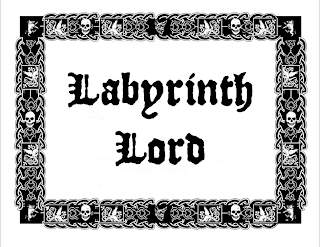 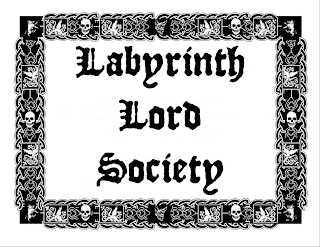 NEMESIS in a Nutshell

I was looking back through some documents from a few years ago, and stumbled upon something I thought would be interesting and handy to share with everyone. First, just a bit of background...
Back in 2006-2007 I was working on and ran a very short lived Sword & Sanity game powered by a customized version of the NEMESIS: Roleplaying in Worlds of Horror system, which is a game that utilizes the One-Role Engine (ORE). ORE is a rules-lite roleplaying system that allows the player to roll a dice pool of 10 sided dice, and this one roll tells you everything you need to know to resolve a situation, both in and out of combat. It is a very clever, and well designed resolution system. The NEMESIS rules are free to download and play, and I highly recommend the game, but be warned it is a bare-boned system that leaves a lot of breathing room, and some may feel needs further fleshing out. Personally, I find this to be a positive thing about the game, because I enjoy tweaking and "messing" with game systems.
During this time I began working on a conversion for the game to help me realize my Sword & Sanity concept, and I called the project NEMESIS by Torchlight, which basically took the modern NEMESIS rules and changed them up for dark fantasy roleplay. I cannot for the life of me put my finger on the rules I had written up for that game, but if I receive enough feedback from this post I would consider taking another look at the project and doing a rewrite.
Anyway, the document I ran across today is titled "NEMESIS in a Nutshell", and basically is all the vital rules from the NEMESIS system compiled together so they can be printed on one sheet of paper (front and back). I have had "Nutshell" available for download over at Project NEMESIS for a few years now, but I have cleaned up a few things and corrected some minor mistakes I was able to find, and I am now offering it here to be downloaded and enjoyed:
NEMESIS in a Nutshell (v1.1)
Posted by Shane Mangus @ 5/26/2010 4 comments:

Looking Back on My First Amazon Purchase

I was browsing some of the more recent posts over at Stefan Poag's blog Aldeboran, and ran across something I found interesting. It seems a recent trend on the 'net is to take a trip down memory lane and see what the first couple of items you purchased on Amazon were. So I decided to play along, and I was pleased to see the results. It looks like I ordered the Baen editions of Robert E. Howard's Bran Mak Morn, Cormac Mac Art and Kull, as well as The Dark Barbarian: The Writings of Robert E. Howard, a Critical Anthology by Don Herron. This order was placed on June 14, 2001 and delivered on June 18, 2001. All for the meager price of $39.58. I was so eager to have the books I did not even take advantage of the free shipping! See for yourself: 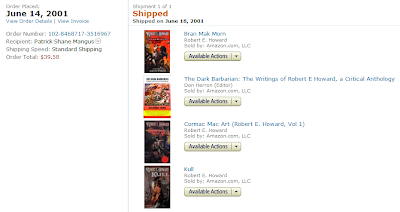 The Outer Dark: Year One Retrospective

As I stated in my last post, Swords Against the Outer Dark just celebrated it's first aniversary! I feel it has been an interesting and fruitful year as I look back on some of my previous posts there are a few that stand out to me. Here are some of those and a few thoughts:
I am sure I have forgotten something, but if what I mentioned above is all that I have accomplished this past year then I am proud of my efforts. I have ambitious plans for the coming year, and if I can find a way to make some of those plans come to fruition it will put my previous efforts to shame. I hope this blog has been helpful and entertaining to those who stop by to read my ramblings. I look forward to offering you much more in the years to come!
Posted by Shane Mangus @ 5/23/2010 5 comments: