I just wanted to take a moment to mention that one week from tonight I will be attending a Meetup group meeting for the Raleigh Tabletop Roleplayers, and I have been asked to make a presentation that will introduce Labyrinth Lord to the group. I will be taking both sets of my Labyrinth Lord and Advanced Edition Companion rulebooks (hardback and softcover), along with copies of the official Labyrinth Lord character sheet, copies of the LL character sheet I designed and several printouts of my Advanced Labyrinth Lord Screen to share with everyone.
I already know this group has a strong interest in Dungeons & Dragons. I have a feeling that most have at least played 3rd or 4th edition D&D, and a few grew up playing the older editions. I have been told that a few folks have been grumbling that they are wanting someone to run an older edition game for them, so all in all I feel confident that Labyrinth Lord will be received warmly by this group. If I get the interest I am anticipating then I will be following this meeting up in the coming weeks with a "Try It Out" session, and run a few people through a quick adventure to let them try out the game firsthand.
Anyone in the Raleigh, NC area who wants to attend I encourage you to do so. We will be meeting at It's A Grind Coffeehouse at 7:00 PM on Friday July 16th. I look forward to talking shop and meeting some new gamers!
Posted by Shane Mangus @ 7/09/2010 3 comments:

I have gone back and forth my whole gaming career with varying opinions on whether miniatures and battlemats are necessary (or even fun) to use when combat is being played out during a game. I have never considered myself a wargamer, and have had little exposure to wargames in general. I like the fact that Dungeons & Dragons, and all the simulacrum/retro-clone games based on the D&D rules, utilize abstract rules for combat, so I never developed an appreciation for wargames or simulationist combat rules found in some RPGs.
As it stands, I am kind of still on the fence on the whole matter. Call it a love-hate relationship. Now, I have to admit that I like minis just as much as the next gamer. Having a physical representation of your character sitting on the game table in front of you is both cool as a visual aid, as well as handy for keeping track of your character's maneuvers during combat. What it really comes down to is that I appreciate the utility of miniatures, but loath the hassle of setting up combat encounters using the minis, a battlemat, terrain props and any of the other trappings that are available to help stage the battlefield. It's really just a big pain in the ass sometimes!
Like most things I find tedious in life, I have found a way to work around the problem by utilizing the good and discarding the bad. In this case my happy medium is this Simplified Battlemat: 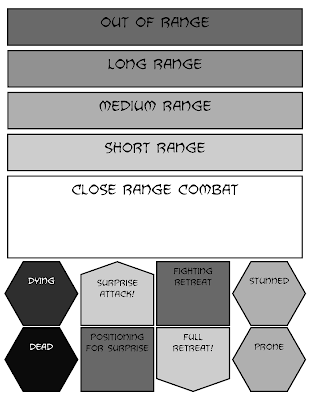 Above is a PNG image of the mat, and below is the PDF version:
Simplified Battlemat

The idea behind this battlemat is to allow the positioning of characters to help track combat, while keeping combat abstract and free-flowing. Minis, tokens, beads, etc. can be used to represent the combatants, and depending on their position and maneuvering they are placed around the battle mat as needed. This battlemat can even be laminated, and a dry erase marker used in place or even in conjunction with miniatures.
Using range bands eliminates the need for grids or hexes, or at least they do in the games I run. First, determine a centralized area that melee combat will occur, and consider this as the "Close Range Combat" area. As the combatants advance or change positions in combat, move their minis into the appropriate range band(s) as needed. If a character is stunned, prone, dying or dead, simply move them out of the range band they are currently in and place them in the appropriate condition field. If moving them from the range band doesn't work for your game, then I suggest leaving the character where they are, tip the mini on its side to make it clear that they are not able to fight, write the character's name on a small piece of paper and place it in the appropriate condition field. The fields marked for surprise and retreat should be self explanatory. Remember, there is no right or wrong way to use this battlemat. Make it work for you...
There are several RPGs on the market that use a similar idea (3:16 Carnage Amongst the Stars, Ancient Odysseys: Treasure Awaits and Agon all come to mind), but I feel this one is unique and suits D&D-style combat quite well. I am always trying to improve upon the projects I post here on the Outer Dark, so if you have a comment or suggestion I am all ears.
Posted by Shane Mangus @ 7/07/2010 12 comments: