What do you get when you take Labyrinth Lord and taint it with a huge helping of Sword & Sanity? Dungeons & Dagons™, thats what! Here is the character sheet, complete with old school look and feel, and Lovecraftian illustrations penned by the mighty Dave Carson.
Dungeons & Dagons Character Record Sheet

*Here is my attempt at a legal disclaimer: this document is a work of satire. It is being distributed freely to the public, and no revenue is being generated in doing so. Dungeons & Dragons™ is ©1995-2010 Wizards of the Coast LLC, a subsidiary of Hasbro, Inc. All Rights Reserved.
Posted by Shane Mangus @ 5/15/2010 7 comments:

Of all the character classes covered in the Labyrinth Lord (LL) rules, or in the Advanced Edition Companion (AEC) for that matter, the Fighter seems to be the most basic. Special Abilities are almost nonexistent. It is painfully obvious that the Fighter can be expanded upon with just a few simple additions to the class, making it more desirable to players who may otherwise choose a more ability rich class to play.
Below are some additional rules that could help flesh out the Fighter class in your game. Remember, these rules are for Fighters only. Rangers and Paladins have enough Special Abilities in place to make them interesting and well rounded. They do not need any more.
Fighter (Optional Rules)
At first level the Fighter gains Weapon Specialization, and must choose a specific weapon to become their weapon of choice. Choose carefully, because it cannot be changed during the career of the Fighter. Once chosen, the Fighter gains an additional +1 to hit and +1 to damage when wielding their weapon of choice.
Reaching 3rd level: Fighters gain a Combat Style. The gaining of this ability reflects the dedication Fighters have toward their skill in arms. An additional Combat Style can be selected at levels 8, 13 and again at 18. Here are four Combat Styles that a Fighter can choose from:
Breaker – this Combat Style specializes in the use of a two-handed gripping technique to gain additional control and power over a wielded weapon. The name refers to the ability of a combatant using this style to break through an opponent's defences using shear force.
Shieldsman – this Combat Style allows the combatant to capitalize on the use of shields in combat. As a result, better defensive tactics are gained, as well as the ability to turn the shield into an effective weapon.
Swashbuckler – this Combat Style trains the combatant to wield two light weapons at the same time. The use of lighter armor allows for greater mobility, allowing the combatant to use tumbling and acrobatics in combat.
Weapon Master – this combat style allows the combatant to focus their training on one particular weapon for additional precision and control.
The rules presented here are considered Open Game License (OGL).
Posted by Shane Mangus @ 5/10/2010 6 comments: 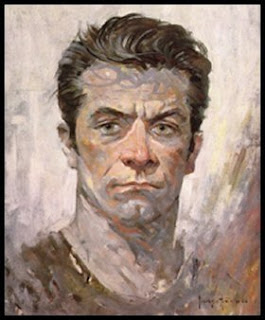 Frank Frazetta
R.I.P.
February 9, 1928 - May 10, 2010
One of my GODS OF IMAGINATION. Thank you Mr. Frazetta for sparking a fire in my head, and sending me on a path to worlds of adventure! You will be missed, but you will live on in your masterful paintings and in the hearts of your greatest fans, like myself...
Posted by Shane Mangus @ 5/10/2010 4 comments:

When thinking about character creation using the Labyrinth Lord (LL) system something that immediately comes to mind that can be added are rules that cover the Social Backgrounds of the characters being created. Below is a simple set of rules that outlines several levels of society that can be used in conjunction with the existing character creation rules covered in the LL Advanced Edition Companion (AEC). If running a human-centric campaign (as I do) these rules can be used in lieu of the racial rules found in the LL rulebook. In this case I have included possible Ability Score adjustments that can be used in place of racial Ability Modifiers. Also, I have included Possible Careers for each level of Social Background. Some of the careers included are not listed on the optional rules Secondary Skills list found in the AEC (page 21), but I do not think the list was intended to be all inclusive or complete, so feel free to use the careers listed or discard them as needed.
Most sword & sorcery stories deal frankly with slavery, and it is part of everyday life. Here is a table for randomly generating Social Background in these types of campaigns:
d20 Social Background:
1-2 Serf/Slave
3-6 Barbarian
7-14 Peasant
15-18 Townsman
19-20 Noble
For campaigns without the issue of slavery:
d20 Social Background:
1-3 Barbarian
4-13 Peasant
14-18 Townsman
19-20 Noble
Serf/Slave
These are the unfortunate souls who live their lives in bondage and sevitude. They are forced into the service of those wealthy enough to own servants. There are no social rights for this level of people, and they are viewed by the rest of civilized society as property, pure and simple. Only the truly lucky find a way to escape their bonds and live as free men.
Ability Modifiers: +1 STR, -1 INT (muscular from hard labor, but poorly educated)
Starting Wealth: per Labyrinth Lord AEC rules x .25
Possible Careers (Secondary Skills):
Barbarian
These are the individuals who dwell on the fringes of society, choosing to live by their wits and survive by primal instinct. They are clannish, valuing honor and kin over everything. Strength of arms and of character are held in high regard, and they will never bow down to be enslaved by the bonds of civilization.
Ability Modifiers: +1 CON, -1 CHR (a hearty people, but a bit xenophobic)
Starting Wealth: per Labyrinth Lord AEC rules x .5
Possible Careers (Secondary Skills):
Peasant
These are the folk who make up the majority of free men who do not dwell within the cities of the world. Hard working and proud, they tend to their farms or work their crafts for trade, earning just enough to get by in life. Almost all of these people work outside of the guild system, so they never seem to gain a leg up when trading within the towns of the land.
Ability Modifiers: No modifiers (a well rounded folk)
Starting Wealth: per Labyrinth Lord AEC rules x .75
Possible Careers (Secondary Skills):
Townsman
These free men are the city dwellers, living their lives within settlements and trading their goods in the market places. Most have apprenticed within the guild system, or have served as town guard, so they have the potential to be highly skilled in a craft or at the use of arms.
Ability Modifiers: +1 INT, -1 CON (well educated, but laking survival instinct)
Starting Wealth: per Labyrinth Lord AEC rules x 1
Possible Careers (Secondary Skills):
Noble
These are the privilaged of the civilized folk. Nobles live lives of luxury and never want for anything. They are highly educated and have access to areas of knowledge and learning that are beyond the grasp of lower levels of society. Nobility can be a cruel mistress, as those who have it want to maintain it for as long as possible and everyone else wants to attain it no matter the cost.
Ability Modifiers: +1 CHR, -1 CON (born to authority, but soft from good living)
Starting Wealth: per Labyrinth Lord AEC rules x 10
Possible Careers (Secondary Skills):
The rules presented here are considered Open Game License (OGL).
Posted by Shane Mangus @ 5/09/2010 9 comments:

In an upcoming series of articles that will be tagged "LL Supplemental" I will be taking a closer look at the Labyrinth Lord system along with it's Advanced Edition Companion, and offering rules modifications and additions that can be used to enhance your game. Some of these articles may be house rules that I have used or plan to use, while others may simply be thought experiments that take the LL rules and bend them a bit to see what may happen. Either way, I hope this series will be entertaining and useful. Finally, this series will be published as Open Game License material. Enjoy, and leave feedback.
Posted by Shane Mangus @ 5/09/2010 4 comments: