I have always enjoyed using various props when running my games. I feel that by displaying certain items on the game table it helps visually set the tone, and tone is all too important when running a sword & sanity game. Props help me as a game master, as well as my players, stay focused on maintaining that tone during gameplay. Humans are by nature visually stimulated, and what better way to help build atmosphere and flavor than have a few visual aids out on display?
As a Lovecraft enthusiast I also have developed a strong interest in collecting Mythos inspired props, "artifacts" and collectibles. I have even tried my hand at creating some of my own. The creativity of some of the things being produced is incredible, as can be seen over at Propnomicon, and I love the do it yourself spirit being shown in the prop making community. It parallels the same spirit that is alive and well in the retro/old school/simulacrum roelplaying community.
I intend to follow this post up with a series of additional posts that further discuss the use of props, but today I want to focus on a couple of pieces from my own personal collection sculpted by the artist Bob Maurus. These two statues were the very first items I added to my Lovecraftian prop collection, and I purchased them both during the year 2000. 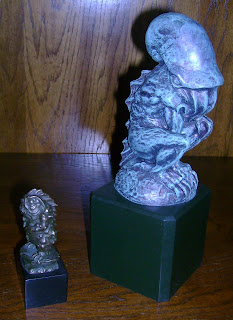 Above is a picture of both pieces standing together. "Big Green" stands 9 1/2 inches tall, and "the Guppy" is right under 4 inches. I love the detail of these pieces, and it is obvious that Mr. Maurus is a very talented sculptor.

This of course is a statue of the Great Old One himself (numbered 725/750), and was sculpted by Maurus in 1995. I ordered this beauty directly from Bob himself, and it was surprisingly affordable, especially considering that it is the heaviest and probably the most detailed sculpture I have in my Mythos collection. I have used this piece several times over the years to display during my various games, and it never fails to grab my player's attention as soon as I place it on the table. It is interesting that Maurus chose not to add wings to his interpretation of Cthulhu, which is perfectly fine, as Lovecraft himself felt that leaving out certain details and adding variation to the description of the entities that lurk within his shared mythology gave the whole process a more authentic feel. 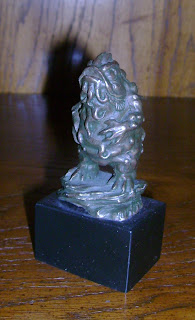 This statue is Maurus' interpretation of a Deep One (numbered 132/500), and I absolutly love the look. He sculpted this piece in 1999. Of the two sculptures I have gotten more mileage out of this one during gameplay, mainly due to it's size. When using minis to represent the characters during combat this piece makes for a cool stand-in of a blasphemous idol, with it's small black base and bronzed look. I have used it to represent Dagon on several occasions, and it looks pretty cool as player characters and cultists fight to the death in it's presence. 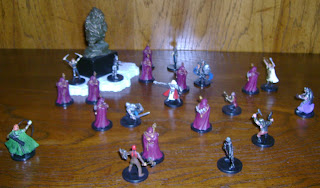 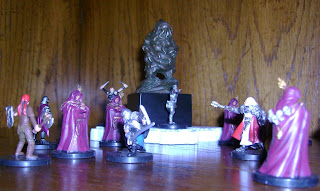 I would recommend that anyone reading this should head over to Bob Maurus' website, but unfortunately it looks like the site is no longer active. I know that when I corresponded with him a decade ago he had plans to create a bust of Cthulhu, but I am not sure if he actually got around to doing so. There is not a lot of current information out there about Bob, but it looks like he is still actively sculpting, and I found a beautiful "Sea Life" chess set he crafted. If anyone has additional information please let me know.
Posted by Shane Mangus @ 3/05/2010 5 comments: 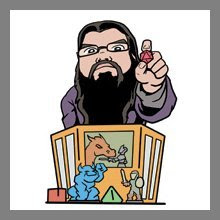 Don't forget that today is GM's Day, which is a day to let those who work so hard running the games we love to play know that they are appreciated. I am part of a gaming group that regularly rotates the game mastering duties, so several of us deserve a pat on the back. Right now the game is Colonial Gothic and the GM is Raulston Hunsinger, so he deserves a special shout-out.
Posted by Shane Mangus @ 3/04/2010 No comments:

I am sure it is apparent to my regular readers that I have updated the header for this blog... yet again. A blog is meant to be a work in progress, so I doubt I will ever settle in and leave the graphics alone. Part of the fun for me when designing a new header is finding a piece of art in the public domain that I can actually use. The challenge is greater than you might think being the theme of the blog is "where sword & sorcery gaming meets Cthulhiana and Yog-Sothothery". Yeah, not a whole lot of Yog-Sothothery going on in the public domain arena.
Last night, while poking around Wikipedia Commons, I ran upon a large collection of scanned plates by the biologist/artist Ernst Haeckel. In this collection there are a hundred pages of paintings and drawings of some of the most bizarre creatures in nature. Needless to say, this was just the thing I was looking for. Since these were published in 1904 it would not surprise me at all if Lovecraft himself had viewed these plates and drew much inspiration (and horror) for some of his creations. I am sure I will be using many of these images in the days to come.
Posted by Shane Mangus @ 3/02/2010 4 comments:

Today I decided to check back in on the One Page Dungeon contest webpage to see how many entries had been submitted. I was very surprised to see a total of 63 entires were accepted, and there is one late entry mentioned as well. That is a lot of dungeon action! I then downloaded the packet that contains all the entries and began browsing. Let me say this, the judges have their hands full! Not only are there a ton of entries in this year's contest, but there are a ton of good entries in this year's contest!
It is amazing to see the variety of what was submitted. That is one of the cool things about the One Page Dungeon (OPD) concept -- everyone has their own interpretation as to what epitomizes an OPD. Just browsing through the various submissions it was interesting to see just how radically different so many of them were.
Personally, when I decided I wanted to design an OPD and enter it into the contest I came up with a short list of goals to help guide me along the way. I knew I wanted to capture the spirit of Swords Against the Outer Dark with my entry -- a dark fantasy adventure that contained strong Lovecraftian elements while at the same time maintaining a real traditional old school fantasy gaming approach. As such, I decided that this OPD would work best as a small sandbox, and only supply the framework required to run the adventure. The replayability factor had to be high, and I did my best to leave some loose ends that would allow for open ended play. To help root it in a traditional fantasy gaming mindset I chose monsters from Dungeons & Dragons to populate this adventure that have obvious Lovecraftian overtones (a gibbering mouther to stand-in for a shoggoth, a grick in place of a chthonian, etc.). Charts for rumors and random encounters round off the old school approach. The map was purposely kept simple and straight forward, and the outside area was left unmapped to allow for open interpretation.
All in all I feel I achieved what I set out to do. Will I win the contest? I hope so -- the prize list is very sweet! I think I have a strong entry, and I have received some good feedback from those around me. Who knows? Only time will tell who will be on the winner's list this year. As I stated earlier, there are so many good entries I do not envy anyone on the judges committee their job...
Posted by Shane Mangus @ 3/01/2010 4 comments:

Email ThisBlogThis!Share to TwitterShare to FacebookShare to Pinterest
Labels: One Page Dungeon

I rode into the mountains today to visit my mother, sister and grandparents. Lately, I have gotten into the habit of listening to various audio-books when I drive any lengthy amount of time. Only being about a three hour (round trip) drive I decided to take along a collection of Clark Ashton Smith stories to listen to instead of starting a full length book.
I stayed for dinner, and did not start back until after 7:00, so it was already dark. The night tonight was perfect for listening to CAS. There were tons of overly dramatic clouds racing about the sky, allowing the full moon to highlight their shapes and occasionally peak through to remind me it was still there. The traffic was very light, so I found myself almost entranced by the spell of the language as the stories were being read. Eventually, "The Willow Landscape" came on, and the narrator's voice was instantly evocative and haunting, and seemed all to familiar. I could not place it at first, but I knew I had heard the voice somewhere before. It soon dawned on me that the voice was none other than Gollum (performed by Brother Theodore) from The Hobbit animated TV movie that was reading to me. The reading was complete with the masterful use of vocal dynamics, the rising and falling of tone and volume and of course those wonderful rolling "R"s that Brother Theodore is famous for.
Anyway, I just wanted to share my "geek moment" of the week, as I realized that Gollum was reading Clark Ashton Smith to me. I couldn't help but smile, and giggle just a bit to myself.
Posted by Shane Mangus @ 2/28/2010 5 comments: