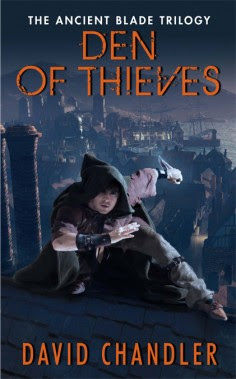 Last week I received something very cool in the mail from a reader of the Outer Dark, David Chandler; his soon to be published fantasy novel entitled, Den of Thieves. David had emailed me a few weeks back and asked if I would be interested in receiving a copy, and of course I was more than happy to do so. The book will be released on August 11th, by Harper Collins.
In his email, David revealed to me that he is a player in the New York Red Box group, is a longtime reader of my blog and from the sound of things he is a proud member of the Old-School Renaissance. Needless to say, he is my kind of guy! He had this to say about his book, "This is not fan fiction, nor the dreaded 'game company novel', but an original story. It is heavily inspired by the contents of Appendix N, most specifically Fritz Leiber’s Lankhmar books." I read the prologue and chapter one last night, and though it is still very early, I can already see I am going to like the story. The main character is a thief named Malden "who had never set foot outside the city" in which the story takes place, the Free City of Ness. All in all, it looks like a fun read, and I will have a review of the book posted as soon as I finish reading it.
Thanks for the book, David!
Posted by Shane Mangus @ 7/28/2011 5 comments:

My Results for the "The World’s Hardest Gary Gygax Quiz"

Shane Mangus took the Hardest Gary Gygax Quiz in the World and got 100%!

You are a Gary Gygax Dungeon Master. You are a world expert on Gary Gygax. My guess is you are either a former TSR employee or an extremely obsessive fan. You can be proud of your in-depth knowledge - few are so expert in any subject! Also, I would like to be in your D&D group. 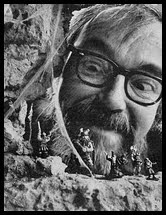 Today would have marked the 73rd birthday of Gary Gygax. If only I could somehow give him a gift as large as the one he gave to me... Happy birthday, Dungeon Master!
Posted by Shane Mangus @ 7/27/2011 No comments:

Tonight, I would like to share a few selections from German Neo-Medieval drum and bagpipe band, Corvus Corax. I am a longtime fan, and have used their music during my games on more than a few occasions. Their sound is firmly rooted in early music traditions, while also possessing a bombastic quality that is normally found in more modern musical genres, such as heavy metal. Their stage presence is an odd mix of medieval and Mad Max, with flamboyant costumes and hairstyles. Despite this, the groups's members have gone to great lengths to keep their sound authentically medieval as possible, even going so far as to handcraft their own instruments. Their live show looks to be a ton of fun, and I hope to be lucky enough to attend one someday.
Posted by Shane Mangus @ 7/25/2011 3 comments: